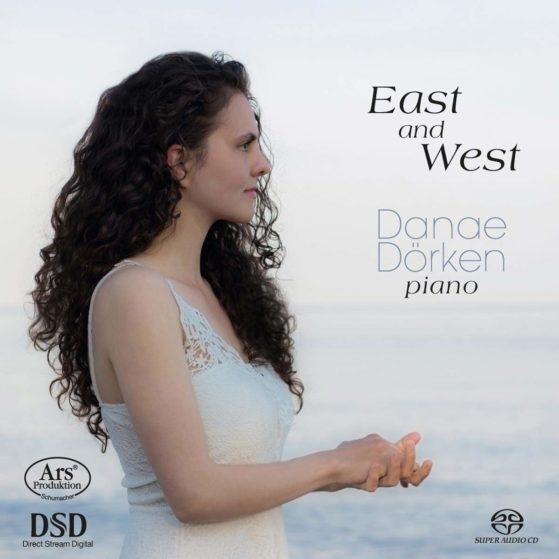 Available now on:
Update Required To play the media you will need to either update your browser to a recent version or update your Flash plugin.

Her ability to interpret works of music in both a spirited and sensitive fashion has drawn the attention of the international music scene to the German-Greek pianist Danae Dörken. After having previously recorded solo works by Carl Philipp Emanuel Bach, Robert Schumann and Leoš Janáček, the 28-year-old releases “East and West” (Ars Produktion, release date: July 5, 2019), an album fusing western piano compositions by Schubert, Grieg, Poulenc and de Falla with pieces by eastern composers such as Chopin, Bartók and the Greek composer Manolis Kalomiris.

For Dörken, a former student of both Karl-Heinz Kämmerling and Lars Vogt, the relationship between east and west has played an integral role not only in her early upbringing but also in her current everyday life. Her mother’s family originates from the Greek island of Lesbos while her father’s family roots lead to the Federal Republic of Germany in Western Europe. She often commutes between the two countries, although her permanent place of residence is Brandenburg, close to the capital city of Germany, where she lives with her husband and two children. She often spends the summers on the island of Lesbos, where she organises an annual chamber music festival with her mother and sister Kiveli. The festival’s concerts feature both long-time musical friends and new acquaintances from all over the world who come together on the little Greek island to perform together. Danae Dörken has made it “her personal mission in this day and age to show that diversity is something that ultimately brings us together and gives us enormous strength.” Her choice to combine the works of a broad range of composers such as Schubert, de Falla and Bartók on her new album East and West reflects precisely the aforementioned sentiment. The compositions on the album all share the commonality of being heavily influenced by folk music traditions. Dörken explains that “the folkloristic character of these compositions highlight the individual elements of each culture which render the pieces unique and underscore the necessity for them to never get lost.”